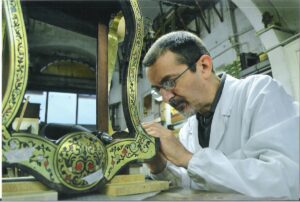 Renato Olivastri began his apprenticeship age 14, in 1972, working in some craftsmanship labs close to Bergamo, taking care of the furniture production on commision for interior decorating.

In 1982 he moved to Florence to attend the course “Restauro di Legni Antichi ” at Istituto d’Arte and Palazzo Spinelli. In 1984 he got into the bottega of Maestro Cipriani, well known Florentine artisan and teacher in the Restauro course, with whom he collaborates with for 10 years. The lab in via dei Velluti is very active. Here, furniture and inlay artworks are currently being restored, including tables and objects from Sorrento late 1800, made in ivory, ebony, mother of pearl, and several pieces of furniture and items made in Boulle style.

Olivastri, collaborating with wood restorers masters, develops a specific and extended knowledge in this field, becoming a true specialist in it. Since 1986 Renato Olivastri pairs his restoring activity with the teaching one at Istituto per l’Arte e il Restauro.

The teaching role at Palazzo Spinelli has led him to teach as well in several Universities and associations, travelling to Brazil, Israel, Serbia, Croatia and Albania. From 2011 to 2014 he collaborated with Accademia di Belle Arti in L’Aquila. In 2018 he has also given a course in Inlay and Restoration at the Escuela de Artes y Oficios Santo Domingo and Bogotà, Colombia.

The name of this style comes from the french ebanist Andrè Charles Boulle, who has been working for the king Louis XIV in Paris until the end of 1600. It consists in covering the furniture with materials different from wood, mainly brass, tortoise, copper, pewter and silver. In the technique called “foro-controforo”, brass laminas are overlaid on tortoise laminas and then cut following complicated drawings.

Shellac comes from the secretion of an insect and has a golden-orange appearance. It is prepared with alcohol (99° temperature). The traditional polishing with a tampon is for sure an elaborated technique that requires both experience and sensibility. In the past it was a job for people who would do this exclusively.

Woodworms are those insects that eat the wood, there are many kinds. When they come out of the egg they can eat the wood also for many years, and just when it becomes an adult the insect can get out of the wood. Below the holes we see on the wood it’s possible that galleries got formed. A disinfection treatment has to work both on the insects’s eggs and the larvas. A simple treatment with a brush or a syringe with chemical products sometimes is not enough since it’s hard to clean uniformly and deeply. In recent years the most efficient cleaning technique used is the Anossia one with nitrogen or carbon dioxide. The bottega has a system for the Anossia disinfestation with carbon dioxide.The wooden work is surrounded by a special material, the air is replaced with carbon dioxide, whose placing has to be daily checked, for a 21 day period. When the treatment is over then the intervention of brush and syringe is useful to prevent new formation.